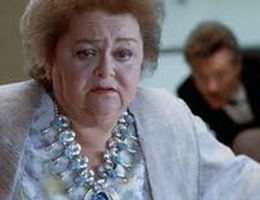 Go Into The Light Carolann

All credible trained mediums will tell you that there is no such thing as spirits being caught between worlds.

They are not ever in a “hell” on the other side. If they belonged to you, why would they want to haunt you and make your life miserable? This is all craziness brought about by unscrupulous people posing as mediums to get attention and probably your money.

Hollywood has taken the beauty and natural wonder of mind to mind spirit communication and bundled it into the world of the occult and they could not be any further from each other in reality than that combination. Steven Spielberg is a wonderful filmmaker and storyteller but he is not qualified in any way to show you the afterlife. He sells fiction and his job is to put people in the seats at movie theaters and scare them, and he is great at that job. I am a big fan of many of his projects but I would not choose his version of what-ifs to sell tickets.

There is absolutely no connection to the real workings of the spirit world and what Hollywood is selling us.

I know that many people make a living “helping people over to the other side” as they are stuck. Absolute nonsense, but it does play into people’s nature to want to be scared of the unknown. Otherwise, there wouldn’t be the rides at theme parks that millions run to every year to scream and cause their adrenaline to race throughout their bodies.

There is a component of human beings that love to be scared of what is unseen that is why we believe that there are ghosts and haunted houses. What is the intelligence behind these haunting and ghostly apparitions? Why does this ghost need to appear at that particular time and to that particular person or people? I do believe that spirit can manifest in some ways that are difficult to explain. I have seen with my eyes open spirit beings moving around in a very methodical non-threatening way.

My thoughts on these few “sightings” are that energy can never be destroyed so in a way there is a “stain” of that spirit that can be seen by some but usually not many people. An experiment you can try with your friends is to have one person stand against a white background like a wall with their arms stretched out like a cross. The other people can be on the other side of the room observing. At a certain point, the person standing against the wall will go to the floor as quickly as possible and the people observing will stay focused on the spot on the wall where the person stood. There will still be an imprint of the energy of that person for a second or two. That is what a ghost is like, an imprint of residual energy. Can it hurt you? No, it is not physical and it wouldn’t want to hurt you anyways.

The film “Poltergeist” from the mid nineteen eighties created a whole new set of false fears for that generation and generations to come. Sayings like “go to the light Carolann”’ has become part of the conversation to many Americans. The truth of the matter is it was just a well made scary movie, nothing more than that. As a matter of fact, the word poltergeist is a German word that means “noisy spirit”. Couldn’t the “noisy spirit” just be a communication from the other side to the physical world here?

That is what I believe it to be. But my version of this is not what the mass population wants because it is not scary. Many of the old-time Spiritualists believed that most ghostly occurrences seem to have happened with teenagers and usually young girls and they then took their opinions another even more bizarre step further by saying that these occurrences of ghostly events were somehow connected to the monthly hormonal cycles of these “high-strung” young girls.

It amazes me how often things that cannot be explained by the limitations of the human brain at a particular time, are often the perception of a flaw of nature, a woman’s menstrual cycle. Point of fact is that these people were just ignorant and based their opinions on the fears of their times and the need to find someone or something to blame and who is an easy target for that blame? Young vulnerable hormonal girls. 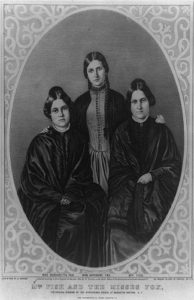 The Fox Sisters – The Smithsonian

We should always try to keep in mind that science and scientist have always had limitations because of the mindset and parameters they work and exist under. And as an aside, try to consider historically the eighteen fifties in the United States was the time that the suffragette movement was getting its footing to make its push through the Victorian era constraints which would also make sense as to why men might want to make the younger females feel confused and ashamed of the changes their bodies were going through.

The repression caused by the male dominant society towards woman’s bodies and its natural functions had given birth to the need for Free Thinkers which is where the early Spiritualist built their foundation. Basically, men trying to hold women down under their thumbs created the atmosphere for the entire movement that Spiritualism and mediumship evolved from. There is an irony to the thought that the woman’s suffragette movement was born at the same time as physical manifestations in western New York State to a couple of young “hormonal” girls, the Fox sisters.

Unconditional Love in the State of Grace

Thoughts to Connect us During the Holidays

Recent Posts
Archives
Categories
Meta
Total is a responsive, drag & drop, flexible multipurpose WordPress theme that is perfect for any website. What's not to love? Get it today!
Buy Now

©2022 The Compassionate Medium | All Rights Reserved